Search for a breed :
Vet's Blog > Worm Infestation in Dogs Most dog owner believe that if the parasite are found or seen in the stool of dog, then the dog is suffering from diseased state. But this is not necessarily the case. Most dogs are infested at one time or other with the intestinal parasite mo matter how carefully they are raised or kept. Some are born with them (parasites) while other acquire them in later stages of life. When they recover they develop certain amount of immunity toward these worms. This immunity will helps them to keep the worm in check.

If worms are causing disease, there should be some change in the appearance of the stool (faeces). Besides, this is reflected by the general health of the dog. The owner may generally if not invariably, notice decreased appetite , loss of weight, upset stomach, anemia mucus and/or blood the faeces and so on to name a few.

Dogs are capable of developing resistance to certain worms, who has a larval phase in their life cycle. These larvas migrate in the tissue of the dog. The examples of these are roundworm, hookworm and threadworm. The effect is on the maturation cycle. The larva remains dormant or inactive as cyst in the tissue instead of becoming adult in the intestine. Whipworm and tapeworm have no migratory stage and thus cause little buildup of immunity.

Resistance to roundworm is age related. Experimentally, it is difficult to induce heavy infestation (over ten worms in the gut) in dogs over six month of age.

Immunosuppressive drug such as prednisolone have been shown to activate large numbers of hookworm larva lying dormant in the dog’s tissue. Similarly stressful event such as trauma, surgery, severe disease and emotional upset (i.e. shipment of puppy) also activate dormant larvae. This lead to an appearance of parasite body in the stool.

During pregnancy, roundworm larvae are activated and migrate to the unborn puppies. By which, a heavy parasite problem may appear in a litter even when the mother is effectively dewormed. This is due to the fact that none of the deworming agents are effective against larvae encysted in the tissue.

There are four types of intestinal worms posing a risk to dog in Nepal. They are roundworm, hook worm and whipworm (3 types of nematodes) and tapeworm. Human can contract certain worms from dogs, although cases are rare. 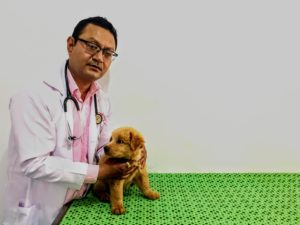