Search for a breed :
Vet's Blog > Cushing’s disease In Dogs 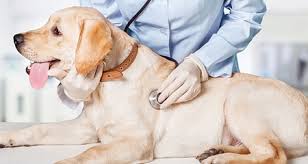 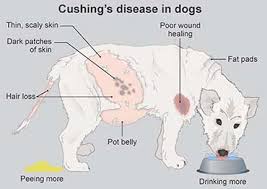 Cushing’s disease is a lifelong complicated condition in dogs which makes the quality of life of your four legged friend miserable. Though you may not able to prolong the life of dog suffering from Cushing’s there are treatment to make their life manageable and comfortable.  This disease is commonly found in middle-aged to older dogs

What do you understand by Cushing’s disease In Dogs?

Cushing’s disease, also known as hyperadrenocorticism, occurs when the body produces too much cortisol. Cortisol is a hormone produced and stored by the adrenals, which are two small glands that are above the kidneys. Cortisol helps the body during times of stress, regulates appropriate body weight, skin condition and tissue structure. However, too much cortisol can weaken the immune system. Too much cortisone over a long period of time can also result in death.  Too much cortisone is a relatively common problem for older dogs.

80% to 85% of Cushing’s falls within the pituitary-dependent type. This means a tumor triggers it on the pituitary gland at the base of the brain.

The pituitary gland produces hormones including the adrenocorticotropic hormone (ACTH). The tumor causes the pituitary to overproduce ACTH which is then dispersed throughout the bloodstream to the adrenal glands causing( forcing) them to produce more cortisol.

The remaining 15% to 20% of Cushing’s cases falls in this category. It involve a tumor located in one or both adrenal glands causing them to produce excess cortisol. Excess cortisol in body have serious negative effect in the body function. It is  usually seed in larger breeds If the tumor is benign, surgical removal will cure the disease. If the tumor is malignant, surgery may help for some time, but the prognosis is much less favorable.  .

3.Excessive cortisol from prolonged use of steroids. The third type of the disease is called iatrogenic Cushing’s disease. It is caused when there is excessive administration of an oral or injectable steroid is used in dogs for various reason like allergy. Although the steroids were usually given for a legitimate medical reason, in this case, their excess use has some deleterious effect sometime cushing disease occur naturally without any reason..

Are some breeds more prone to Cushing’s?

Yes some breeds are genetically predisposed to developing cushing’s disease.

What are the clinical signs of Cushing’s disease?

Typically, an affected dog drink and urinate excessively and is also constantly hungry. It eventually develops a pot- bellied appearance which the many owners are confused or suspect worm infestation.  But the cause of this pot bellied appearance is due to fat deposition and the internal organ being heavier. Hair became thin and falls from the body, but not the head and legs. If the hair of dog is shaved it does not regrow. Dog pant a great deal and such dog are more weaker and lethargic  than normal counterpart. Skin infection (pyoderma) is common.  dark-colored spots (hyperpigmentation), skin mineralization (calcinosis cutis), poor skin healing, and persistent bladder infections are other common clinical signs with this disease  Sometime Neurologic changes in advanced pituitary-dependent hyperadrenocorticism can also be seen

How it is diagnosed?

It is difficult disease to diagnose and exact or 100% sure shot method is not available till date. The vet will analyze the dog’s symptom and do some further test to rule out other possible diseases.

Blood test will reveal changes to white blood cells and increased in liver enzyme activity like alkaline phosphatase.Excess sugar may also be found in the blood. X-ray or ultrasound scan show liver enlargement in most affect dogs. In males, the testicles are often small. There is also occurrence of urinary tract infection and diluted urine.

A definitive diagnosis is made by monitoring the cortisol response of the adrenal glands to stimulating and/or suppressing drugs..This test is used to determine whether the source of the disease is pituitary gland or adrenal gland. The two most common tests to detect Cushing’s disease are the ACTH stimulation test and the low-dose dexamethasone suppression (LDDS) test.

Pituitary- dependent Cushing’s disease is treated with drugs that suppress pituitary gland over activity, Impervious gloves may need to be worn when handling some of these drugs. Treatment of the pituitary-induced form of Cushing’s disease is the most complicated. Two drugs, trilostane are .mitotane are commonly used.

The ideal treatment option for Cushing’s disease due to adrenal tumor( most commonly) is surgical removal of the tumor. This is not always possible in Nepal as well as it is not practical. So the drug like mitotane are used to suppress the overactivity of adrenal gland. Sometime ketoconazole is also used less commonly but the result is not satisfactory.

Iatrogenic Cushing disease usually disappears or corrected spontaneously once the dose of corticosteroid is gradually reduced or taper down. This must be done in a controlled, gradual manner so that other complications do not occur.

. The most important thing you can do is to follow your dog’s treatment plan. Keep a close watch on his behavior and symptoms, and give him the right medication doses at the right times. You and your vet can work together to help him live a happy, healthy life.