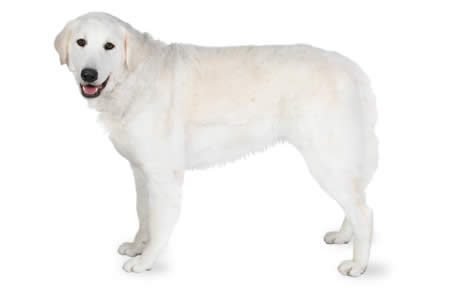 KUVASZ, its name is a corrupted spelling of Arabian and Turkish words that reflect the unparalleled guarding instincts of this large breed. The Turkish term kawasz means “armed guard of the nobility. The Arabian word kawwasz means “archer,” which reflects the high esteem in which the dog was held. The Kuvasz was bred to protect flocks of sheep belonging to nomadic Hungarian shepherds. The breed is known for its keen intelligence, fearlessness and loyalty. It is an intimidating and independent guard dog, known to act on its own initiative when it deems it appropriate.

Today’s Kuvasz, smaller than its giant ancestors, was largely developed in Hungary. The Kuvasz was a constant in the European kingdoms and empires that flourished five to eight hundred years ago, although the breed is thousands of years old and probably was brought to Hungary by nomadic Magyar tribes who traveled between Asia and Europe. The Kuvasz is related to the Komondor, according to von Stephanitz, a renowned German authority on Central European breeds. He speculates that the Kavasz or Kawwasz was crossed with native Hungarian country dogs to produce the Kuvasz of today. In the 14th and 15th centuries, only royalty and those favored in royal circles were allowed go own a Kuvasz.

The Kuvasz should do well on a high-quality dog food, whether commercially manufactured or home-prepared with your veterinarian’s supervision and approval. Any diet should be appropriate to the dog’s age (puppy, adult, or senior). Some dogs are prone to getting overweight, so watch your dog’s calorie consumption and weight level.

The Kuvasz has a double coat, consisting of guard hair and fine undercoat. His coat is very easy to care for, needing only weekly brushing to remove debris and reduce shedding.