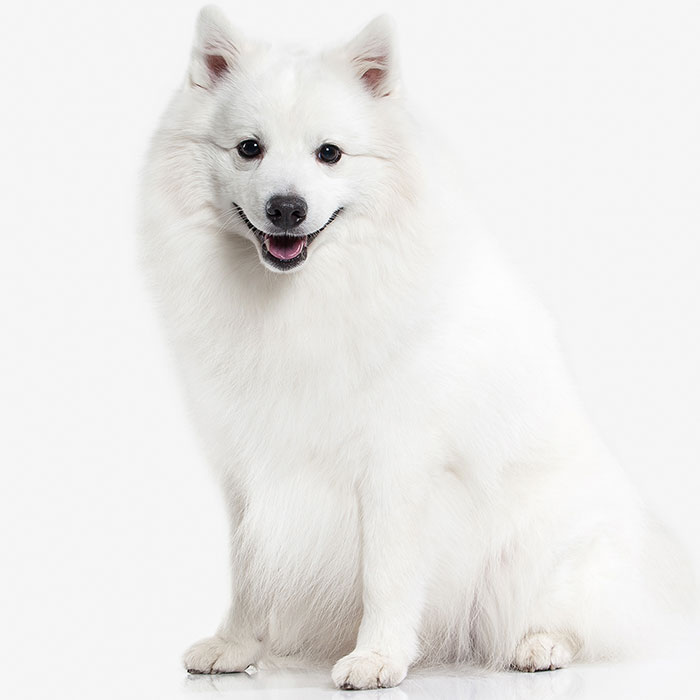 The Japanese Spitz is a companion dog and pet. There are varying standar ds around the world as to the ideal size of the breed, but they are always larger than their smaller cousins, the Pomeranian. They were developed in Japan in the 1920s and 1930s by breeding a number of other Spitz type dog breeds together.

Dog breeders in Japan in the 1920s and 1930s created the Japanese Spitz by crossbreeding a number of other Spitz breeds to develop the Japanese Spitz.[5] Breeders began with white German Spitz dogs, originally brought over from northeastern China to Japan; they were first exhibited at a dog show in Tokyo in 1921.[6] Between 1925 and 1936 various small white Spitz breeds were imported from around the world and crossed into the developing breed, with the goal of producing an improved breed.[6] The final Standard for the breed was written after World War II, and accepted by the Japan Kennel Club.[6] The breed gained popularity in Japan in the 1950s, and was exported to Sweden in the early 1950s. From there the breed went to England, and the Kennel Club recognized the Japanese Spitz in 1977 in the Utility Group.

Japanese Spitz can tolerate cold weather but, as it was bred as a companion dog, prefers to live in the house with the warmth of its human family. Though they can live in apartments, they need ample time running around outside off-leash in a safe environment. Due to the texture of their coat, mud and dirt falls off or can be brushed out very easily. However, due to the breed’s thick coat, regular brushing is essential.

The Japanese Spitz’s coat is relatively dry as compared to other breeds. Their coat should be groomed twice a week using a pin brush that reaches to the undercoat, preventing formation of knots.[14] Grooming this breed is relatively easy in contrast to other dog breeds. Their white fur coat has a non-stick texture often described as being similar to Teflon.

As an active breed, the Japanese Spitz needs a diet that is formulated for active dogs. A small-breed formula is also recommended because these formulas provide the energy small dogs need to maintain their fast metabolism. Japanese Spitz dogs are very intelligent and eager to please which makes them very adaptable to training. The key is to start training your dog early and to maintain consistency so your dog learns quickly and remembers your commands. In addition to obedience training, the Japanese Spitz is also a good candidate for agility training and various dog sports including Fly ball.

Like many small breeds, the Japanese Spitz is prone to developing behavioral problems if not properly trained or exercised. Training does more than just ensure that your dog follows your commands – it also gives your dog mental exercise to stave off boredom. If your dog becomes bored, he is more likely to develop behavioral problems like digging and chewing. The Japanese Spitz in particular is said to be a big dog in a little dog’s body, so training is essential to keep your dog’s big personality under control.