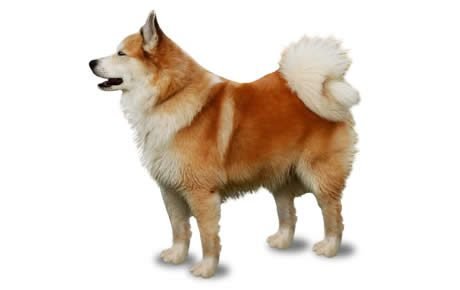 The Icelandic Sheepdog, is Iceland’s only native canine breed. It is an ancient breed that was developed for the purpose of herding, controlling and guarding flocks of sheep and rounding up other types of livestock. It also was (and still is) used to pull sleds and prized as a family companion, when not working in Iceland’s tough terrain. These are spunky, friendly, small-to-medium-sized dogs with pricked ears, plume-like tails and thick, warm coats that come in both long and short-haired varieties.

The ancestors of the Icelandic Sheepdog are believed to have arrived on the island of Iceland between 874 and 930 AD, coming with the first Norwegian settlers (the Vikings) and their livestock. This is thought to be one of the very oldest of all domestic dog breeds. Icelandic Sheepdogs were described in the Icelandic Sagas more than one thousand years ago and are mentioned in modern literature dating back to the 16th century. During the middle ages, some of these sheepdogs were exported to England, where they became a favorite of the royal and rich. A 1570 reference was made by Caius to “Iceland dogs, curled and rough all over.”

The thick double coat of the Icelandic Sheepdog is very waterproof and can be one of two lengths: medium or longer, always with a thick, soft undercoat. It can be straight or slightly wavy, and it comes in several colors — shades of tan, ranging from cream to reddish brown; chocolate brown, gray; and black — all with white markings and sometimes with a black mask. The tail is very bushy. Weekly brushing will keep the coat in good shape.
The Icelandic Sheepdog should be fed a diet appropriate to the dog’s age (puppy, adult, or senior) and activity level.