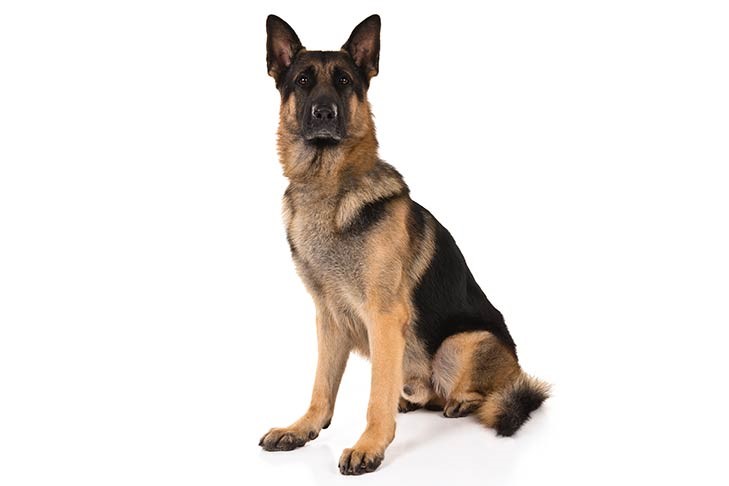 The German Shepherd Dog, also known as the Alsatian, Deutscher Schäferhund, or GSD, originated (as the name suggests) from Germany. Their original purpose was to herd large flocks of sheep, not by the traditional method of nipping and barking; but instead kept order through their swift, stealthy movements and strong demeanor. Sound judgment and a stable temperament became a hallmark of the German shepherd breed, and led them to become known as excellent police K-9 dogs, search and rescue dogs, and guide dogs.

The German shepherd was developed in Germany in the late 1800s, originally to manage large flocks of sheep. The forerunners of the GSD resulted from crosses of native dogs in northern and central Germany. The German shepherd’s role was to move along the edges of the flock and usher stray sheep back into the fold – not by barking or heel-nipping, which could panic the sheep, but instead by silent, steady and stealthy movements. The modern German shepherd apparently was first exhibited at a show in Hanover, Germany, in 1882. Founded in 1899, the German Shepherd Dog Club of Germany (the Verein fur Deutsche Schaferhunde) was the original parent club for the breed. The German shepherd’s popularity grew rapidly in Germany and spread worldwide throughout the 1900s. There reportedly were more than 40,000 GSDs “enlisted” in the German Army during World War I. They were able assistants to the Army and the Royal Air Force during World War II. The German Shepherd Dog Club of America was founded in 1913.

A high-quality dog food appropriate for the dog’s age (puppy, adult, or senior) will have all the nutrients the breed needs. The German Shepherd Dog has a medium-length, double coat consisting of a dense, harsh, and close-lying outer coat with a softer undercoat. The breed is easy to maintain, usually requiring just a quick brushing every few days or so to help remove loose hairs, but they do shed more profusely once or twice a year. During these periods, more frequent brushing will help control the amount of hair that ends up around the house and on the furniture. The German shepherd only needs an occasional bath.

GSDs are often sought as guard dogs and protectors. However, while they are first and foremost a herding breed, GSDs can make outstanding, loving family companions. German Shepherds have a rather distinct personality marked by a direct and fearless expression, obvious self-confidence and reluctance to develop indiscriminate friendships. They tend to be indifferent to strangers and can be aloof; however, once they befriend you, their devotion is life-long.